From Microwiki
Jump to: navigation, search

This mostly focuses on USB cameras. AmScope seems to lead the consumer market (say $50-$800 or so) using various sensors under the hood. ATIK (astronomy focused) and Apogee seem to both be popular at the next price bucket ($1000-$4000 or so). Of course, once you get to this range people typically know what they want and applications can be specialized.

This is about the core sensor used in a variety of cameras. Note that specific camera implementations can have a dramatic difference in image quality and thus two cameras using the same sensor aren't necessarily interchangable

I'm just going to assume that anything with MT is Micron before the subdivision and AR is Aptina (where did the R come from?)

These are a good option if you want something decent at a reasonable price. Don't believe they make any of their own cameras though. By pulling from multiple vendors they are able to offer a wide selection from 0.3MP inexpensive eyepiece cameras to pricy, but presumably good quality, cooled CCD cameras.

NOTE: -CK simply indicates calibration kit is included, does not effect the camera and so are omitted from cross reference charts 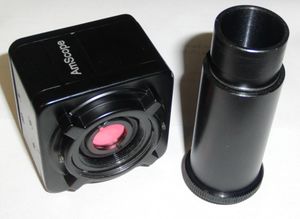 Above: AmScope MD1800 (ScopeTek DCM800). Camera left showing red AR coating and 10x c-mount relay lens right. I didn't get mine new so I'm not sure what accessories they come with but mine did have eyepiece adapters.

The cameras themselves are made by ScopeTek. I think ScopeTek has its own GUI software and the AmScope software is made by AmScope.

Originally used with the 3.0 GUI (or at least when I got it): 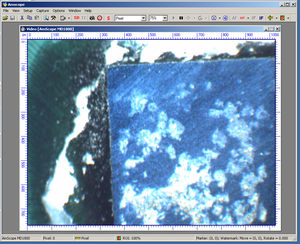 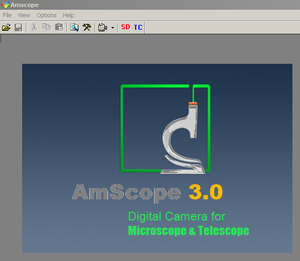 The driver is a collection of files but essentially boils down to stonedrv.sys per being a ScopeTek camera. 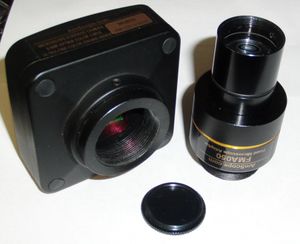 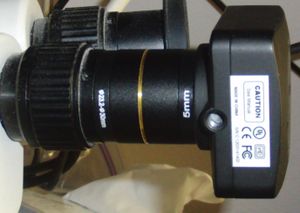 Left: camera left showing AR coating with 10x relay lens right. Note that the relay is shorter than the previous generation. Also comes with an aluminum threaded cap for the relay lens (the MD series has baffles, not threads on the end of the relay lens). Right: showing threaded mount and adapter used to mate to inspection scope.

The cameras themselves are made by ToupTek. The software is updated to work with them. Similarly, ToupTek publishes their own unrelated software.

Mechanically the camera is stronger than the MD1800. It is much heavier in weight having a thicker case. The c-mount threading is much deeper. Another nice improvement is that the relay lens has a rubber gasket where as the MD relay lens I had to crudely seal myself to prevent dust from entering through the camera port. I haven't compared the optical quality, I in particular wonder what sort of design tradeoff where made to make the relay lens shorter. Its also a lot fatter so it might have simply been a height vs width tradeoff. FOV is about the same. The threaded port is also a nice feature, I can think of a number of situations where it can come in handy.

One item of interest is that the USB port is a lot harder to take in/out than the MD series or other typical USB devices.

NOTE: I had problems with the driver crashing on a USB 1.0 computer. Upgrading the machine (VM) to USB 2.0 solved the problem.

The GUI is evidently now ToupView per the new ToupTek cameras: 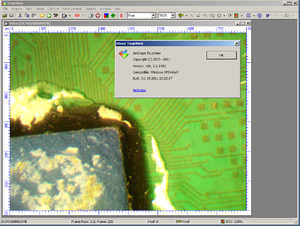 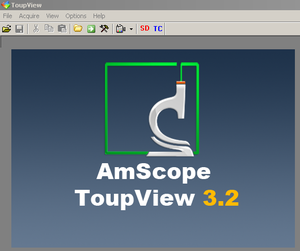 HOWEVER, while the mechanical improvements are appreciated, I am unsure the electronics/driver is as high quality as the previous generation. The camera occasionally fails to startup in the GUI. A large problem is that it does not work with DirectShow (verified through multiple completely different applications). This is a huge issue for me as the Python library I use for the CNC microscope uses DirectShow at the core.

Have been using this for a while. Started this section in attempt to improve quality from some distortion I'm having.

Looking to see what it would take to match it up to BH2: [4] 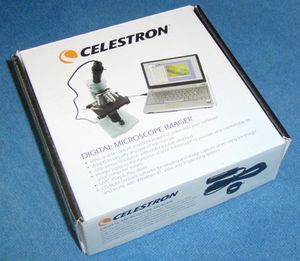 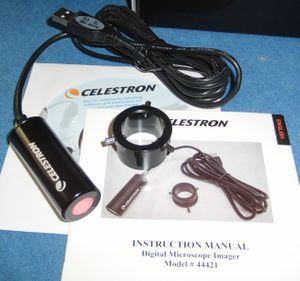 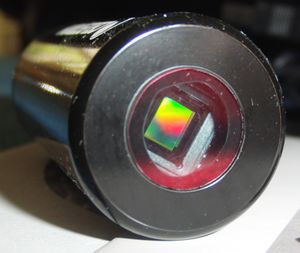 I got this camera in a cereal box...err from frequent flier miles. I got it mostly because my miles were expiring and I figured I might as well get something with them. I could have got several but I wasn't sure if I was going to use the one let alone several. As of yet that's remained true as I still haven't plugged it in.

I doubt they are OEM. Looks like their main bussiness are telescopes

Saw some of these for a high price (Moticam Pro) on eBay, not sure of quality. Considering some of those use 2/3" sensors though which are pricy probalby decent quality

The "everything in one" camera...has USB, composite, SD card, etc

The actual manufacturer is ScopeTek using a Cypress FX2 USB microcontroller. I haven't looked at the sensor. I tried to reverse engineer the protocol and got images but couldn't figure out how to lock the frames meaning if you ever dropped a packet the picture got out of sync. Contact JohnDMcMaster at gmail.com if you are interested in figuring this out to get a Linux driver.

"DCM A Series: cylinder shape, DCM B Series: square shape". Omitted from table below since they are same inside

I have an AmScope square version. It is a c-mount with a 0.5X c-mount relay lens on it

"*All of our DEM series cameras are driverless. They can be setup directly with Windows XP SP2/ Windows Vista"

The OEM GUI is maybe called either ScopePhoto or MiniSee (I haven't tried using them.

On the software side, one nice thing is that they have Windows, Mac, and Linux support. The Linux GUI is simple but functional. Unlike the Windows driver the Mac/Linux versions use libusb (as opposed to kernel modules). This is nice in that it makes the application portable but prevents third party applications from accessing the camera. Therefore I'm going to complete reverse engineering / re-implementing a driver for it so that it can work with the CNC application. 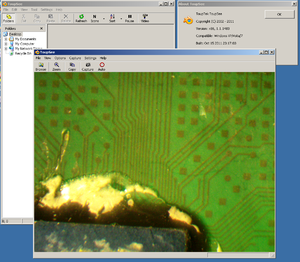 Similar to the Tucsen GUI it includes a file manager. One thing unique to this GUI is that the video window is separate from the main window, a feature that I'm lukewarm over.

I think there is an alternate Windows GUI. 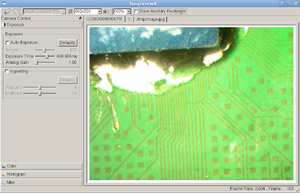 I saw it running under Mac but didn't grab a screenshot, I think it was slightly different. Although their website references the Linux version I couldn't find it posted anywhere. However, I e-mailed support and they e-mailed it to me in a few days and seemed generally helpful.

If you get this error:

Because this is a 32 bit binary you need to install the dependencies.

It uses libusb so you'll need to run it as root or other workaround:

These all use the same driver package, haven't looked as to how related they are. Very confusingly the TCC-1.4H is listed for two drivers. I'll leave it in both sections for now until I understand better why 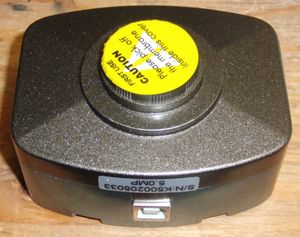 I got one of these (actually I have a 5MP and a 10MP) off of eBay new and it had an atrocious sensor (it looks like a starfield when dark). It also appears to use the same chipset as my MD1800 but the external looks nothing like on the ScopeTek website. Unless I get better evidence to show this was a one time fluke, these are garbage and should be avoided.

Update: got a new unit and it doesn't have problems:

Interestingly enough it has a different USB VID / UID such that it no longer works with the AmScope software. But it doesn't have the bad pixels (or at least visibly). Still, it has the same internals so it probably uses the same driver. Presumably the Tucsen casing is larger to give it a higher quality feeling. That said, I don't mind a heavy duty aluminum case but it is oversized.

NOTE: I had problems with the driver crashing on a VM, possibly the same problem as the AmScope driver (needed to enable faster USB)

I recently found out there is a Linux SDK although I didn't see any mention of it on their site. It provides an interface to libCamCore.so.1, a libusb based userspace library.

Designed to be used with Tsview: 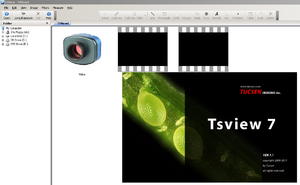 Much busier than the AmScope software. Has things like a file manager which depending on your workflow could seem a bit out of place if you just want software to take pictures.

These show up on ebay for a few k, not sure quality. I've seen firewire though and some look cooled so probably decent quality.

Makes 16 bit USB cameras intended for astronomy (most other cameras are 8 bit). Expect to pay 1,000+

USB microscope camera seen on eBay. Could be ScopeTek