First section is about what the system does as of today. Below that shows how it arrived there

Klinger/Micro-Controle/Newport variable reluctance UT100-50PP (50 mm). I've read these are rated to 0.1 um accuracy. IIRC they use UE30PP motor but you can get a stepper version.

However, instead of using the variable reluctance motor a stepper motor was attached via a custom machined adapter plate, flexible shaft coupler, and 4-40 standoffs from discarded computers

Unknown who makes the base but its very heavy duty

Failed attempts that never made a working system 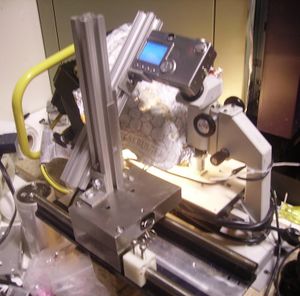 Above: manually operated system. Clicked point and shoot camera to take pictures. t-slot aluminum lines it up to the monocle. 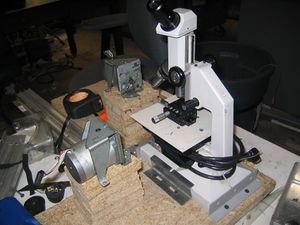 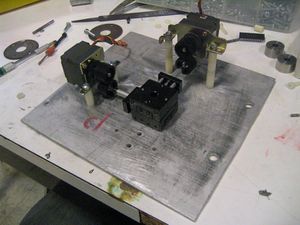 Above: Instead tried to spring load some gears onto the stages. Slightly non-linear but very predictable. I don't recall what the specific problem was with this system, but probably just difficult to keep the gears aligned 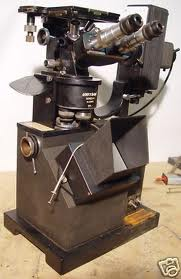 Above: an unmodified microscope of the same model 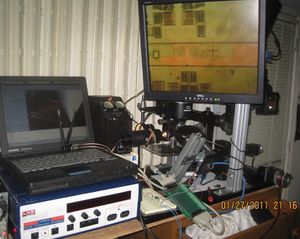 Above: basic idea of setup. Microscope stage has been removed and the microscope has been turned upside down to make it right side up. Point and shoot similar to mk0. I soldered wires onto the shutter controllers and routed them to EMC2 (LinuxCNC) software that ran g-code to move Sherline 2000 mill stages (something I already had…and the only "nice" thing I had at the time). Pictures were snapped by sending coolant mist (focus), coolant flood (snap picture), followed by coolant off (release shutter). $20 laptop with a wireless card from a scrapped access point. 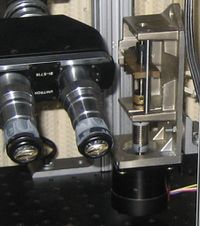 Above: since the original stage had been removed I needed a way to focus it. Linear stage removed from a broken spectrometer found in school dumpster and spring loaded with a rubber band to maintain position (intended to be gravity spring loaded but I'm holding it the "wrong" way) 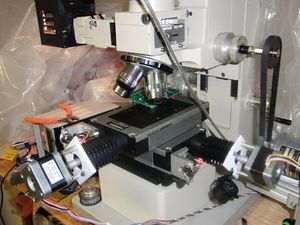 Above: very first test before installing the tip tilt. Note riser block is still present below stage. This takes a way a lot of my clearance making it so that I couldn't use Mitutoyo objectives 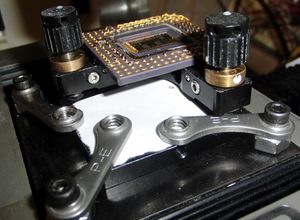 PMC VS series drivers that I found in the trash 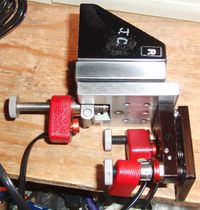 Ultimately it turned out I didn't really need the picomotors. The real issue was that the original leadscrew was poor quality. I just use them as leadscrews and don't use the motorized capabilities. At first I had problems bumping stage and so used the joystick to avoid touching things but now I'm quicker just adjusting by hand without issue.

switch off selects it 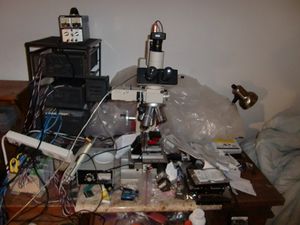 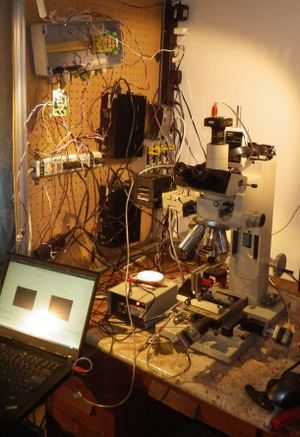 07/19/2014: is currently out of service due to broken laptop (and has been for a while). replacement parts in the mail. cleaning up electronics while its down

built t-slot cage around desk. mounted pegboard to which I attached the various electronics to clean them up and get them off the desk (the idea cabinet thing just wasn't working very well) 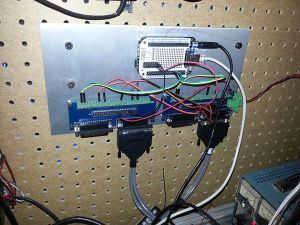 Discovered my MDrive17 units are set to 51200 microstepping. This is a bit high...may pose issues getting BBB to step fast enough especially given already high gear ratio

Created high performance BBB configuration. Although my step rate is way smoother and higher than pr0ndexer, the high microstepping meant that I stayed at about the same max velocity (possibly losing some). About 4 rev/s max

Appears to be either missing steps or I have the ratios wrong. Consider setting up a repeatbility test using microscope itself to target something.

NOTE: original cables had these two ports which were repurposed into power lines:

Probably intended to be used for limit switches

Removed. Never pinned out but was just red + black wire

T7 star to take off BH2-UMA